From novelist to climate crusader: How one woman is working to put a stop to natural gas

If you are not a Washington Post subscriber, read our summary here.

Natural gas leaks in Boston are vastly underreported — and could be coming from inside homes, study says
The Washington Post, Oct. 25, 2021

Six times more natural gas is leaking into the skies of Boston than is officially reported, new research shows. The study, published in the Proceedings of the National Academy of Sciences, also suggests that gas could be escaping not only from distribution pipelines but from inside businesses and homes as well — a finding that some say may be overstated.

The science on natural gas’s role in climate change has advanced and the policies enacted by the state have called for nothing short of a transition off of fossil fuels by 2050. That changes the math on pipeline replacement, said Ania Camargo, one of the founders of Gas Leaks Allies. “The fundamental assumptions that created GSEP have changed,” she said

As an alternative to hydrogen, Magavi’s GeoBlock concept, also known as a geothermal district, could use existing natural gas rights-of-way to heat and cool buildings.

National Grid (NYSE: NGG) has agreed to cut the monthly cost of its geothermal heat pump demonstration project by over half from its original proposal for low-income participants and stretch the project payment out over a longer period. *Story available with free registration to RTO Insider.*

The Surprising Root of the Massachusetts Fight Against Natural Gas
Eos, May 21, 2021

In 2019, the Massachusetts Department of Public Utilities adopted the new classification, and the changes may slash the state’s emissions by approximately 4% in as little as 3 years, said Audrey Schulman, a climate activist with the Boston nonprofit the Home Energy Efficiency Team (HEET) and member of the Gas Leaks Allies. 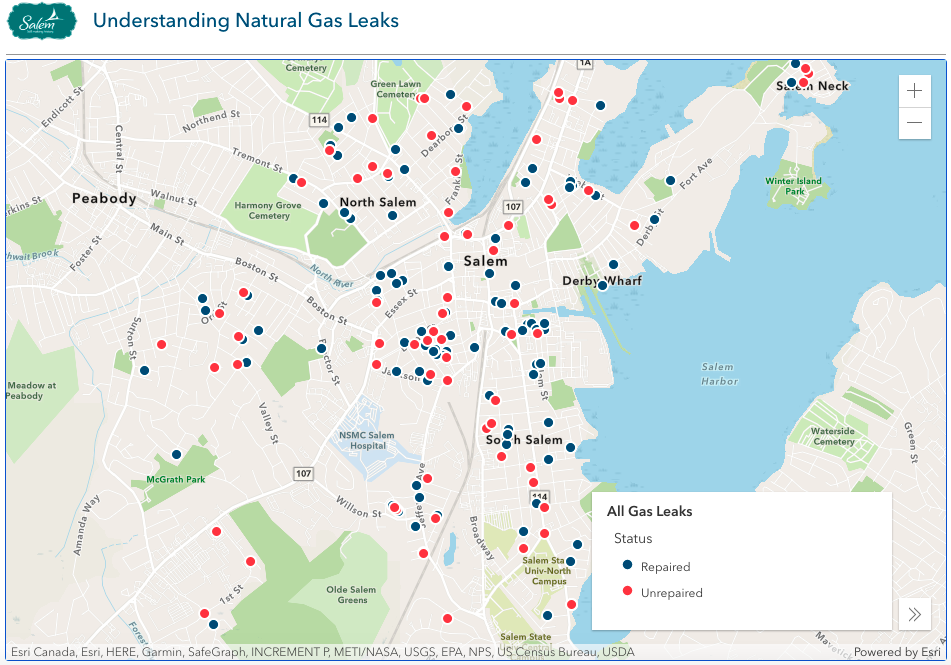 Legislation enacted in 2014 requires gas companies to report gas-leak information annually to the state. Through those disclosures, HEET has been analyzing, geocoding and mapping National Grid’s information, making the raw data more accessible.

“We have to work with the pieces we have,” said Magavi. “The fastest way forward is to flip utilities’ financing mechanisms and customer networks, all these pieces that we can redirect toward building a better energy system.”

In Newton, leaks in gas lines are a never-ending challenge
The Boston Globe, Jan. 27, 2021

“We need to avoid rebuilding, basically, a 19th-century infrastructure,” said Nathan Phillips, a professor in the Earth and Environment department at Boston University who lives in Auburndale. “Instead, we need to pivot toward the heating of the 21st century.”

How HEET is Cutting Out Carbon and Transforming Energy
Conservation Law Foundation, Jan. 11, 2021

One way of helping people, especially during this pandemic, is to make sure they can pay their bills, which is part of HEET’s plan for the Transdev funds. The organization plans to provide outreach to residents to access the low-income discount rate for their energy bills and enroll in energy efficiency programs that further cut emissions while reducing their bills.

Can gas utilities survive the energy transition? Massachusetts is going to find out.
Grist Magazine, Nov. 4, 2020

Magavi and Schulman are the masterminds behind a particularly innovative solution to decarbonize the gas system that they believe will benefit utility companies and customers.

In a virtual meeting per state orders, the Somerville Commission for Energy Use and Climate Change (CEUCC) met on Wednesday, August 12, to discuss plans for a more sustainable future, and all the steps in between.

The co-executive directors, Zeyneb Magavi and Audrey Schulman, presented plans for a microdistrict with the intention to cut carbon emissions and reduce fracking.

Beneficial electrification is used to describe the need and the benefit to our society to electrify all our buildings. The primary purpose for doing this is to reduce the emissions coming from combustion heating of those homes and businesses.

HEET is proposing a new way to heat buildings where old gas pipe is dug up, through the “Geo-Micro-District,” an ambient temperature, shared-water loop connecting many customers for both heating and cooling.

“Some of the gas pipelines in Boston date to the Civil War. … Is this the infrastructure we want for the coming century?” Magavi said.

Geothermal Microdistricts & the FUTURE: A renewable alternative to gas heating
Take Back The Grid, April 4, 2020

The panel brought together state Senator Cynthia Creem, Audrey Schulman and Zeyneb Magavi of HEET (Home Energy Efficiency Team), Jordan Stutt of the Acadia Center, and Craig Altemose of the Better Future Project to discuss climate science and the potential of regional transportation and energy improvements in Massachusetts and nationwide.

“Due to the hard work and unyielding efforts of groups such as the Home Energy Efficient Team (HEET), Mothers Out Front and the Gas Leaks Allies, Massachusetts legislators understand that the state’s aging natural gas pipelines are leaking methane, adding to the challenges of reducing greenhouse gas (GHG) emissions…”

Gas companies reported 32,877 gas leaks across Massachusetts in 2018, according to a new report from the Department of Public Utilities, a consequence of an aging system that a leading advocate says remains inherently unsafe.

“It’s pretty much the same year after year,” said Audrey Schulman, co-executive director of HEET, a Cambridge-based energy efficiency nonprofit that maps gas leaks across the state. “That’s a demonstration that we’ve got an aging infrastructure that is unsafe.”

Environmental advocates urged Eversource to consider investing the millions of dollars it would take to build the new pipeline in alternatives, such as networked ground source heat pumps, which transfer heat from the ground to warm buildings and pump heat back into the ground to cool them. They note that such geothermal technology has been used for years in Europe, and that the utility has already announced plans for a pilot program of the technology.

The Boston City Council on Wednesday approved an ordinance requiring buildings larger than 20,000 square feet to cut emissions completely by 2050.

As Philadelphia works to tackle climate change, a question emerges: Is PGW on board?
WHYY, May 28, 2021

Julie Greenberg, a climate and racial justice advocate who works with the interfaith grassroots group POWER, has a vision for Philadelphia’s energy future: GeoMicroDistricts, or a network of underground pipes carrying water, shared by homes in a single block or neighborhood, powered by the region’s abundant geothermal energy.

Can Philadelphia’s gas utility survive in a climate where fossil fuels are shunned?
The Philadelphia Inquirer, May 11, 2021

Several activists expressed support for replacing gas service with geothermal microdistricts, which would connect clusters of homes and businesses to a common geothermal heat source, built and managed by PGW.

“We shouldn’t be installing new gas infrastructure when we know we’re going to be decarbonizing by 2050,” said Audrey Schulman, founder and co-executive director of HEET, a nonprofit that promotes geothermal energy. “We need to be aggressive about pursuing non-fossil fuel sources of energy.”

After passing a landmark climate law, Mass. officials now face the hard part: how to wean the state off fossil fuels
The Boston Globe, April 6, 2021

“It’s just fiscally irresponsible, and it sets up a classic utility death spiral,” said Zeyneb Pervane Magavi, co-executive director of HEET, a Cambridge nonprofit that specializes in energy efficiency. “As people move off the gas system, you have fewer people paying for it, meaning they will be shouldering more of the costs. It’s a disaster.”

“You can move what would be wasted energy around to the building that needs it,” in a form of energy sharing and load canceling. A state-wide study two years ago found that “any place that has gas systems currently can get almost all the heating and cooling done through a network of ground source heat pumps, but it may be challenging in densely populated areas.”

Can we really end our reliance on natural gas? These moms have a plan — and the ear of utilities.
Grist Magazine, Jan. 8, 2021

In this episode, Audrey and Zeyneb talk with Ron Kamen about the danger of gas leaks on our streets. They also talk about community geothermal heating and cooling systems that replace leaking gas pipes in a more natural way that is not only safer for everyone – but helpful to the environment as well.

Zeyneb Magavi of HEET, the Home Energy Efficiency Team, explained “we want to move communities away from gas,” therefore silencing concerns of another gas explosion.

An option, according to Magavi, is ground source heat pumps.

Geothermal heating systems can also be made more efficient by linking multiple buildings to the same pipe system… Schulman and Magavi from HEET argue that these systems could be connected at a much larger scale. They have studied the potential for gas utilities to transition into networked geothermal companies that oversee a “thermal grid.”

The report, compiled by environmental groups using data from publicly regulated utilities, found at least 15,728 gas leaks statewide at the end of 2019, some of them dating back several years. A majority are “grade 3” leaks, considered the least dangerous, but the report’s authors note that any leaking combustible gas is a hazard.

“Gas companies in Massachusetts are not historically allowed to innovate, and they’re not allowed to deliver anything other than gas to their customers,” Schulman said in an interview. “And so, they are unable to change. Because they have to replace the infrastructure now for safety, they are installing at incredible cost a technology the was cutting edge in the 1800s.”

A Study Advocates for a Utility-scale Approach to Replace Existing Gas Lines with Ground-source Heat Pumps
Retrofit Magazine, May 4, 2020

The leading building retrofit magazine posts an explanation of the problem of leaking gas pipes and the GeoMicroDistrict solution.

GeoMicroDistricts are ground-source heat pumps arranged in a closed vertical system that could be installed in a single row along an existing utility corridor. Vertical boreholes and service connections could be located between existing infrastructure.

City officials say they’re backing the project because it would further Boston’s “commitment to climate action.” They see its potential to become a model for other micro-district heating systems, a success story that could be replicated elsewhere…

“Perhaps this is the time for gas companies to explore a new business model, one with a promising future for both the companies and the planet. A business model where the companies deliver renewable heating and cooling to homes and businesses along every street, allowing customers a choice in our renewables from both wires and pipes.”

How a Climate Change Nonprofit Got Eversource Thinking About a Geothermal Future
Earthwhile, Jan. 13, 2020

HEET commissioned a study to investigate if there were a way to make geothermal energy appealing to both utilities and environmentalists.

Read more in our archive.