Natural gas is sent to our homes and buildings through pipes under the street. in Massachusetts, some of these pipes are over 100 years old and leaking.

No Need to Fix It

Until 2016, utilities were not required to fix any leak—no matter how large—unless it was considered potentially explosive.  Thus, many of the leaks in the Greater Boston area were first reported decades ago and still have not been fixed.

A leak on the corner of Park Drive and Beacon Street in Boston went unrepaired for 30 years before it was fixed. 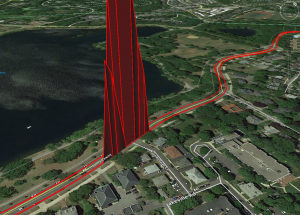 In 2016, researchers found that just 7% of all gas leaks are much bigger than the rest, emitting half of all the gas pouring into the atmosphere from a leaky distribution system.

Within a few months, a Massachusetts law was passed, mandating that the gas utilities fix these leaks of “environmental significance.  Fixing these leaks will dramatically reduce emissions and save money in the fastest, most efficient manner.

However the gas companies, having always had to worry only about safety and not emissions, had no proven method of identifying the largest leaks.

This was where HEET came to the rescue with the Large Volume Leak Study, finding a fast, reliable and scientifically proven method of identifying the worst leaks so they could be fixed.