Who Are the Gas Leaks Allies?

In the middle of the day, the room is packed with 25 environmentalists, academics, activists, and other experts wanting to reduce methane emissions from gas leaks.  The energy is excited; this group has helped pass two laws in three years.  Before attending the Gas Leaks Allies meeting, I have never been witness to such a high level of mutual respect and collaboration. 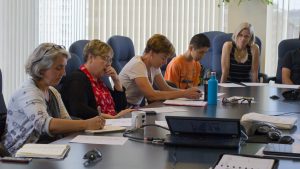 Last week, Audrey Schulman, President of HEET, described a recent gas leak event in which volunteers helped HEET’s research team to measure a huge leak.  The average underground natural gas leak saturates the surface soil above it with gas for 100 square feet.  This leak covered over 32,000 square feet. As the head of this project, Audrey expressed her gratitude for the volunteers’ time and enthusiasm on site.  Measuring a leak of such size would have been impossible without help. 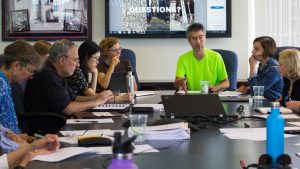 Lee Humphrey, a member of the Neighborhood Association of the Back Bay, recalled that Audrey and Jason were down in the mud calling out readings while Lee was on timer duty and his wife stood in the road, wearing a safety vest and diverting traffic.  He described the unrelenting heat, the delicious watermelon, and what he learned first hand about measuring gas leaks.  Knowing that he’s an accountant and often contributes his expertise with numbers to the allies, I could tell he was thrilled to help with HEET’s data collection.

Up next, Zeyneb Magavi, mother, climate activist and HEET’s lead researcher, gave a “view from the street” powerpoint presentation on how the research is being performed.  She had come running from a dig site in Lexington, steel toe boots on her feet and gas leak measuring equipment in hand, to make a special appearance.  She discussed in depth the equipment she uses, the people she’s met along the way, and the takeaways of the research.

The Gas Leaks Allies meetings provide a powerful feeling of community and collaboration in a time and place where it is easy to feel alone in environmental issues.

Audrey says, “All grant foundations want nonprofits to collaborate in their work, but actual collaboration is hard to engineer as the nonprofits tend to fight over funding or recognition or methods or who does what work.  The Gas Leak Allies is the only experience I’ve ever had of a large group of nonprofits working hard and seamlessly toward a united purpose.  United we’ve had so much more impact.  Methane is a greenhouse gas that is 86 times more powerful than CO2 over the first 20 years of its life.  The sheer power of it seems to bring something out in people so that they work 86 times harder to fight it.  I’m so proud to be part of it.”

The optimism and determination rooted within the collaborative efforts of the Gas Leaks Allies makes them outstanding.  Their progress charges me to move forward in my own studies and environmentally focused career; the Allies are a model environmental coalition.