The Big One That Almost Got Away

We knew the leak was a big one. National Grid told us they thought it was a high volume gas leak. When we surveyed it using combustible gas indicators—a tool the utilities commonly use—we were amazed at how vast this leak was. The average leak saturates the surface area above it (whether it’s soil, sidewalk, or street) with detectable levels of gas for 100 square feet. This leak covered 20,000 square feet.

So, at 8 a.m. on a sunny Saturday, six of us set out to measure the amount of gas escaping across the surface area. Armed with a bag of bagels, two specially-outfitted plastic tubs, three combustible gas indicators, timers, and clipboards, we got to work. 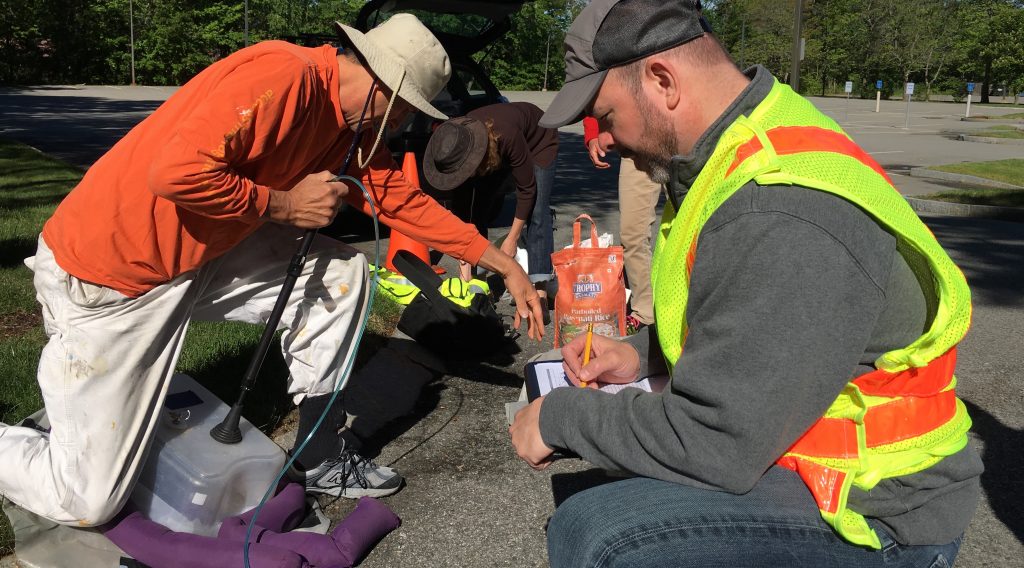 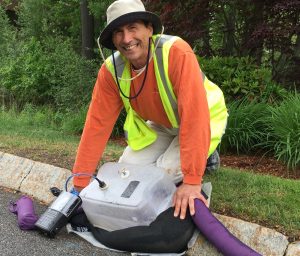 We used what’s known as the chamber method to capture and then measure the emissions from the leaking ground. To start, Jason inverted a plastic tub over a small section of curb. Mark weighed it down and started a timer. Then, Jon stuck a probe in a hole in the tub and started recording how fast the gas accumulated. After four minutes, we moved the whole operation two feet to the left. 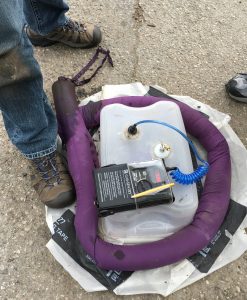 Over cracks in the street, around signposts and trees, along curbs, through mulched gardens, even over a manhole cover, it was nine hours before we felt we had recorded the speed of gas emissions across most of the worst parts of the saturated area. Later, Eddy would use the information to calculate the total emissions.

We found our highest readings around a fire hydrant. Could the leak be underneath? Was the length of pipe under the street so corroded that the whole thing was leaking? Whatever National Grid would find when it excavated the leak to repair it, the emissions we recorded earned it the “Biggest Gusher I’ve Ever Seen Award” from Audrey.

So, on to the next leak to find its footprint, but that would have to wait for another day. Our knees were sore, our hands smelled of gas, and the bagels were gone. Collecting data can be tedious, but it had been a good day. We had become an efficient, leak-measuring machine, collecting valuable measurements for a study aimed at developing the best ways to find and fix the biggest gas leaks. Our reward was knowing what this could mean for our neighborhoods, our health, our kids, and our planet. Our bonus was lots of jokes, good stories, and a hands-on appreciation for the size of the problem of gas leaks. 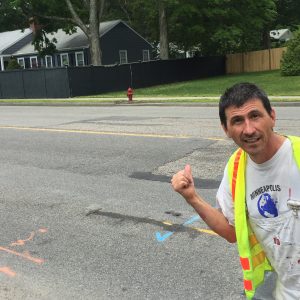 We’ve just found a leak that’s 30% bigger than the one in this story.