Pulled out of Paris? Working harder for renewables. 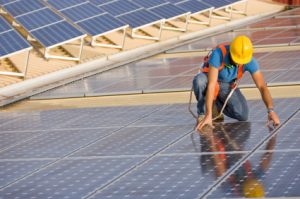 My job involves a lot of time on the phone with solar contractors around the country, guiding them through the ins and outs of solar financing. I reckon I’ve talked with nearly 200 solar contractors over the last year and a half. Our conversations almost inevitably drift in other directions. A common tangent? American politics.

Last week, I spoke with a solar business owner named Eddie who builds off-grid projects in remote, sun-drenched Northern California towns with names like Burnt Ranch, Hyampom, and Scarface. I’ve worked with Eddie for over a year come to know him as a deeply conservative homesteader who told me last year he wouldn’t vote for Hillary Clinton because she would increase taxes on assault rifle ammunition. Always good for fiery, expletive-filled commentary about our country’s government, Eddie’s general stance is as right wing and defiant as they come.

Naturally, I had to ask him what he thought about Trump withdrawing the U.S. from the Paris Agreement.

“You know what?” he told me, shouting into the speaker phone in his truck while traveling between solar installs. “I was all for Trump until he pulled us out of the Paris Agreement. Why would you turn your back on renewable energy in favor of coal? That sh*% makes no sense. It makes me want to work even harder.”

This declaration was wind in my sails. Sun to my solar. Water to my turbine. Not necessarily because it shows an erosion of Trump’s base, though depending on your political views that may be worth cheering about on its own. No, Eddie’s response was invigorating because it echoes a sentiment I’ve heard repeatedly over the last 18 months: Renewable energy truly, undeniably, brings people with seemingly opposite views together. It doesn’t matter if you support renewables because you want to protect the climate or because you want to create more jobs. There’s something for just about everybody. Trump’s actions haven’t weakened this reality; they’ve widened it.

John works for Sungage Financial, a Boston-based company that funds residential solar projects throughout the country.