Our new report with UndauntedK12 provides the first statewide analysis of gas leaks reported at school properties. The results make tangible and relevant some of the ways in which our continued reliance on fossil fuels is a present danger to communities and is undermining the future of today’s young people.

Utilities in Massachusetts are required to provide periodic reporting on gas leaks present in gas mains and service lines. We used utility annual reports covering calendar year 2021 to understand the extent to which these leaks are proximate to schools. During 2021, 91 schools in Massachusetts had a reported gas leak in a gas main or service line at the school property. 31 of those leaks were graded as hazardous; most were repaired the same day.

None of the leaks that we describe here are currently an imminent threat to human safety; nor are these examples of wrong-doing by schools, utilities, or first responders. Rather, what we describe is the reality of living with gas infrastructure: pipes leak. These leaks have dramatic impacts on our climate and, in some cases, pose a safety risk. Massachusetts is currently at a crossroads with the Future of Gas proceedings, a sizable investment opportunity with federal COVID relief dollars and plans by the Legislature to pass omnibus climate legislation that addresses emissions from buildings. State leaders should take this opportunity to invest in the decarbonization of our buildings so that they are no longer dependent on fossil gas equipment and the leaky pipes that supply them. Our school buildings are a great place to start.

Massachusetts has some of the natural gas infrastructure in the country1. Old pipes in this system are leaking methane – the primary ingredient of fossil gas – a greenhouse gas 84-86 times more potent than carbon dioxide over its first 20 years in the atmosphere2. The cost of this wasted gas is passed on to customers and is estimated to be $7 million dollars per year3. Methane from gas leaks poses a safety hazard to people and may be responsible for tree death.

Leaks in Massachusetts reported in 2021 were responsible for an estimated 6,734 metric tons of methane emissions, equivalent to 579,138 metric tons of carbon dioxide4.

Gas leaks are graded as 1 for hazardous, 2 for potentially hazardous, and 3 for non-hazardous. Grade 3 SEIs are grade 3 leaks with “Significant Environmental Impact”, where the gas has saturated the ground for 2,000 square feet or more.

These so-called non-hazardous leaks are massively hazardous to the climate. SEIs are a small fraction of leaks, but are responsible for an outsized portion of the emissions5. The annual estimated impact of all SEIs in the state is equivalent to the emissions of one-third of all Massachusetts stores and businesses (i.e. the commercial sector) in 2017 and approximately 3% of Massachusetts’s overall greenhouse gas emissions6.

Policymakers and regulators have worked to address gas leaks. Regulation requires that hazardous leaks receive immediate attention and utilities are required to prioritize the repair of leaks in school zones7.  In 2016, the Massachusetts legislature required that SEIs be repaired.

The utilities’ Gas System Enhancement Plan (GSEP) is the utilities’ plan to replace all the leakprone pipes under the ground in Massachusetts. The GSEP has a current annual cost of $600 million, all of which is eventually paid for by customers8. The work to replace the remaining 5,000 miles of pipeline is expected to continue to 2039 with a total cost of $40 billion9.

Schools across the Commonwealth rely on this gas distribution system as many burn (or “combust”) fossil gas to keep school buildings warm. Like the distribution system, the gas-burning heating equipment within schools is notoriously old. A recent report by the US Government Accountability Office found that 41 percent of districts nationwide need to replace HVAC systems in over half of their schools. In Worcester, for example, 46 percent of school buildings were constructed before 1940, many featuring inadequate or out-of-date HVAC systems that could be updated to improve indoor air quality while also reducing energy usage and emissions.

Massachusetts leads the nation in bringing transparency to the reporting of gas leaks in the distribution system. This transparency is key to understanding the current prevalence of gas leaks, their geographic concentration, and implications for the safety of residents, including students.

This is the first statewide analysis of the extent to which reported gas leaks are proximate to schools.

Our analysis found that during 2021, 91 schools in Massachusetts had a reported gas leak in the gas main or service line at their property. Of these, 31 leaks were graded as hazardous and required immediate attention by utility workers. All leaks were repaired, the large majority within one day of the initial report.

Use the map to explore the analysis results, noting the following :

The leak locations at school properties are concentrated in the eastern portion of the state and generally reflect the geographic distribution of gas leaks reported at all locations in the Commonwealth.

Figure 1: An example of a hazardous gas leak at North Quincy High School that was reported on January 3, 2021 and repaired on January 4, 2021 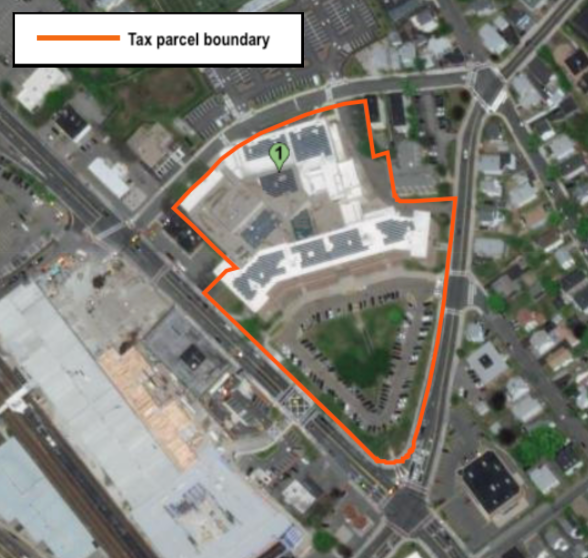 Several school properties hosted SEI leaks. For example, as of the end of 2021, an SEI was located at Parthum Middle School serving about 550 students in the Lawrence community. Lawrence, along with the neighboring towns of North Andover and Andover, experienced the Merrimack Valley Gas Disaster in 2018 that killed one community member, injured several others, and displaced thousands from their homes for days or, in some cases, months.

Figure 2: An example of an open gas leak at the end of 2021 with significant environmental impact at Parthum Middle School in Lawrence, with tax parcel boundary shown in orange

Beaver Country Day, a private school located in Brookline and serving about 490 students in grades 6 through 12, was the site of an open SEI at the end of 2021.

Figure 3: An example of an open gas leak at the end of 2021 with significant environmental impact at Beaver Country Day School in Brookline, with tax parcel boundary shown in orange

While schools work to prepare students for the future, the continued burning of fossil fuels undermines it. Methane emissions such as those occurring on these school properties are a powerful contributor to climate change which is on track to render the planet unlivable for humans. The combustion of fossil fuels is responsible for 1 in 5 deaths globally.

Schools have a commitment to keep students safe; but gas leaks pose a safety risk. The evidence here pertains to leaks in gas mains and service lines. The utilities’ gas leak surveys do not cover the inside of buildings, thus we do not know if gas leaks are present within school buildings. Additional research, data collection, and monitoring is sorely needed to assess conditions inside school buildings and the potential health impact of gas leaks.

What we do know is that gas-burning equipment emits health-harming combustion pollutants and this pollution undermines human health. Gas-burning equipment may also leak uncombusted gas and can pose a significant safety concern if the gas accumulates indoors. The New London school explosion, which was caused by a gas leak, killed over 300 students and teachers, and remains one of the deadliest disasters in Texas history.

The utilities’ Gas System Enhancement Plan comes with a $40 billion price tag. This equates to roughly $23,500 per gas customer. Given Massachusetts’s goal to achieve net zero by 2050, a potentially better use of these funds would be to support building envelope upgrades and heat pump installations.

The decision to build natural gas pipelines and infrastructure was made multiple generations ago when energy from gas was the state of the art. We have the opportunity to transition away from gas to clean and renewable solutions in our homes, in our workplaces, and in our schools. Now is the time for state leaders to work with districts, municipal leaders, and other community and private sector partners to make a plan and invest in a cleaner, healthier future.

How the Analysis was Performed

In order to locate schools, we use a point data layer from MassGIS. This data include all schools in the Massachusetts Department of Elementary and Secondary Education (DESE) school profiles database as of July 29, 2020. Categories of schools include public elementary, public secondary, public vocational/technical/agricultural regional, private, charter, and special education.

We identify property tax parcels using a polygon data layer also obtained from MassGIS. The standardized assessors’ parcel mapping data set contains property (land lot) boundaries. School property parcels are appropriate to analyze given that students spend time not only in buildings but on the school grounds and on the roads proximate to the school while traveling to and from school. 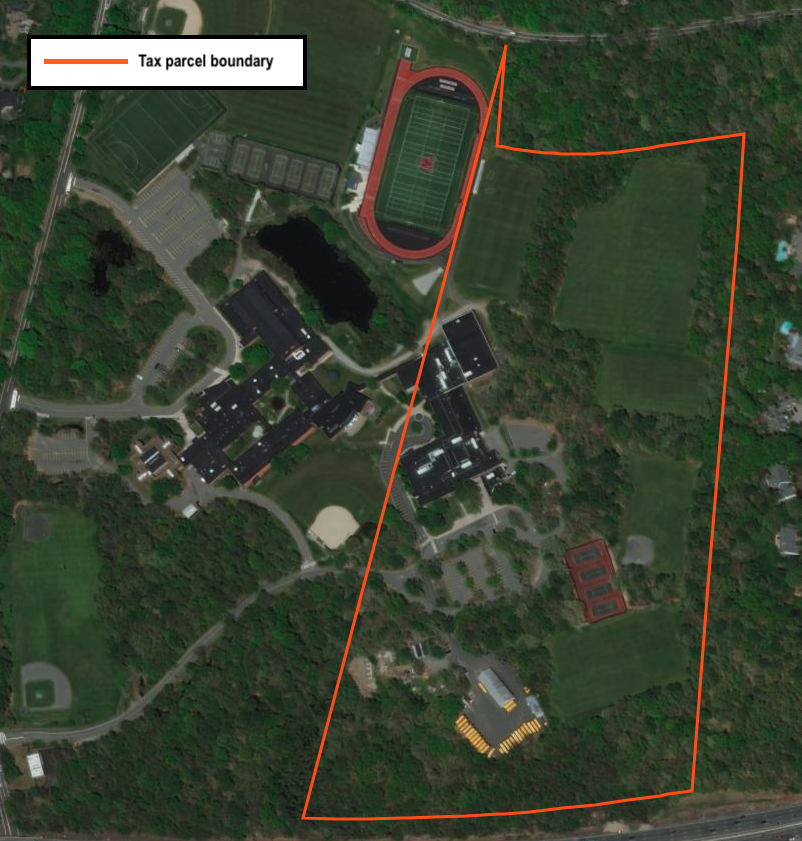 The resulting school parcels were manually reviewed for accuracy.

Utilities report gas leaks by street address. The leaks described in the data are leaks from gas mains or service lines in the street or leading to buildings. This data cannot be used to determine whether or not there is gas leaking and accumulating inside school buildings.

This gas leaks data is shared through a created commons license by HEET.

Intersecting the locations of the gas leaks and the school property tax parcels allows us to identify gas leaks located in school tax parcels (see Fig. 6).

Dominic Nicholas is a Director at HEET. Sara Ross is a co-founder of UndauntedK12, a national nonprofit with a mission to support America’s K-12 public schools to make an equitable transition to zero carbon emissions while preparing our youth to build a sustainable future in a rapidly changing climate. Emma Hines is a Health and Air Quality Associate at RMI, an independent nonprofit founded in 1982 that transforms global energy systems through market-driven solutions to align with a 1.5°C future and secure a clean, prosperous, zero-carbon future for all.